The Celebration of Triumph of Good over Evil – the ‘Durga Puja’ and its centenary celebrations at the India Club, Margherita, Assam, India!

The Assam Railways and Trading Company Ltd., a pioneer in coal mining business in the North Eastern Region of India, initiated their business interests in this remote corner of the Country sometime during 1881 and people from different parts of India assembled at Margherita, the ‘Coal Queen’ of Assam to serve this British Company who started operation in this locality for exploration of coal and other forest products and this gave birth to a heterogeneous society.

The society though consisting of a handful of population considered themselves as members of the same family.

Inspired by the idea of introducing Durga Puja at Margherita, a few enthusiastic employees of the AR&T Company started this Puja sometime in the year 1909 at a Mandap near the AR&T Company LP School which became the grounds of the present day India Club.

Late Aswini Kumar Deb Roy who was one of the most influential personalities of that time took the initiative and continued with the responsibility for years for the celebration of Durga Puja here with Brojolal Banerjee, Upendrananth Das Gupta, Bhupati Chakraborty, Srish Chandra Das, G K Baruah and others.

Availability of priests to perform the Puja was a problem faced by the organizers and this was eradicated by bringing Sarada Mukhopadhayya and Rakhal Bhattacharjee particularly for this purpose. Mukhopadhaya and Bhattacharjee were engaged from the very inception and after they left, Durgadas Bhattacharjee took the responsibility.

To add to the Grandeur of the Puja and to attract people, amusement in the form of Dance and Cinema were arranged. Staging of dramas by the members of the India Club for all the three (3) days was a highlight of this puja and this continued till the early seventies.

In front of the general office of the AR&T Company, another Puja used to be performed which later amalgamated with the Sarbajanin Durga Puja in 1946. To accommodate people of all sentiments of the practice of goat sacrifices was abolished. But prior to that goats upto a limit of even 300 used to be sacrificed each day.

This festival of the Durga Puja that was started back in 1909 by a group of enthusiastic devotees has since then only grown in stature. With the passage of time this Puja has come to symbolize the true spirit of oneness and brotherhood. Although its grandeur has reached sublime heights over the years the spirit and essence of this Puja have retained the flavors of its inception.

Jungleideas welcomes you to India’s North East to witness the Celebration of Triumph of Good over Evil – the ‘Durga Puja’ and its centenary celebrations at the India Club in the heart of the Coal Queen of Assam, Margherita, the State of Assam, Incredible India! 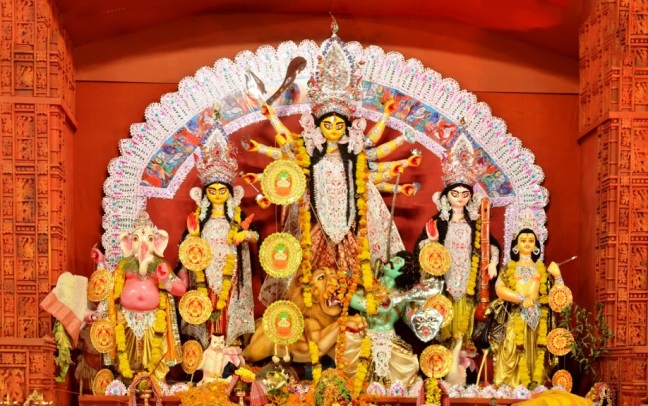 The Centenary Durga Puja Celebrations at the Coal Queen of Assam, Margherita

Kaziranga at a Glance