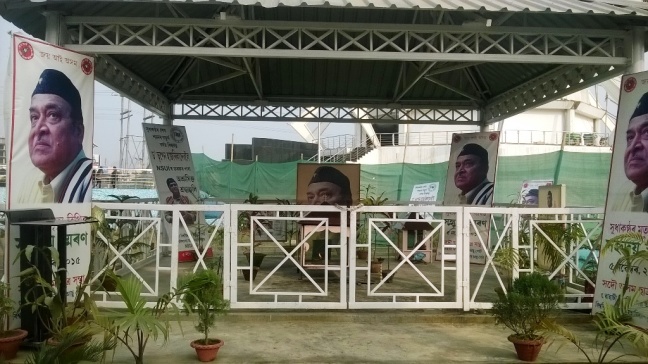 Listening to “Manuhe Manuhor Babe, Ganga, Amar Xomajor…” and a countless many brings a sense of nostalgia in every Assamese across the globe. These lyrics remind everyone about the taste of Assamese soil that they are associated with, no matter wherever they stay. And these words were written by none other than our very own and beloved Dr. Bhupen Hazarika, who perhaps was an individual whose essence and charisma gave Assam a worldwide recognition. A multifaceted genius, he was also a poet, music composer, singer, actor, journalist, author and film-maker of the very highest repute. He has been therefore, hailed as the uncrowned king of North-Eastern India’s cultural world.He was the face of Assamese music and literature scene for decades till he passed away on 5th November,2011.

His life in brief:

Bhupen Hazarika was the most well-known personality from Assam. He was born in 1926, in Sadiya, Assam & he held an M.A. degree in Political Science from Benaras Hindu University, and a PhD in Mass Communication from the Columbia University, New York, where he came in contact with,and was greatly influenced by, Paul Robeson. He recorded his first L.P at the age of 10 and acted in the second Assamese movie ‘Indramalati’ in 1939.

His Career in Music:

Bhupen Hazarika has composed music and sung for the highest number of Assamese films made in the past 4 decades. He has rendered music, written lyrics and sung for numerous Assamese movies like ‘Era Batar Sur’ in 1956, ‘Shakuntala’ in 1960, ‘Pratidhwani’ in 1964, ‘Lotighoti’ in 1967, ‘Chick Mick Bijuli’ in 1971, ‘Mon Projapati’ in 1978, ‘Swikarokti’ in 1986, ‘Siraj’ in 1988. He also directed, and composed music for Arunachal Pradesh’s first Hindi feature film in colour ‘Mera Dharam Meri Maa’ in 1977. He directed a colour documentary for the Arunachal Pradesh Government on Tribal folk songs and dances entitled ‘For Whom The Sun Shines’ in 1974.

Dr. Bhupen Hazarika’s eternal remains are buried at the memorial at Jalukbari near Guwahati in Assam. A calm and serene environment that has been converted to a Memorial Park recently and his soulful music plays across the gushing waters of the fountain that is located in the memorial in Assam.

Jungleideas welcomes you to India’s North East to pay tribute to the one of the Greatest Son of Assam at the Dr. Bhupen Hazarika Samadhikshetra, Guwahati, Assam, Incredible India!

Kaziranga at a Glance